This program seeks to connect homeless individuals with basic necessities’ such as: housing, food, toiletry items and other resources. Horizon Outreach works collaboratively with other agencies to host street outreach and seminars to provide these services.

Mr. Mark Douglas, a single father and graduate of the Horizon Eagle Fatherhood Program received permanent housing for him and his son. Mr. Douglas,  successfully completed the Fatherhood Program where he obtained valuable relationship., parenting and employment skills.

During his enrollment in the program he expressed he did not have stable housing and that he and his son were homeless. Immediately Mr. Douglas was connected to a shelter and eventually this lead to him and his son being placed in his own apartment. He now has a safe place to call home.

When his son was asked about his new apartment: He said: “I like it, I feel like we have accomplished something.” 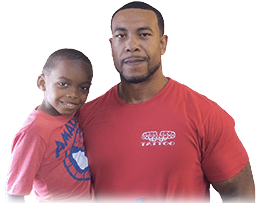 Help Us “Give Everyone A New Start”